Vaccination as an alternative in controlling coccidiosis

The first live Eimeria vaccine for the prevention of avian coccidiosis in the world was launched in 1952 in the United States.

However, its large-scale use only started in the 1980s in line with the international movement to restrict the use of growth-promoting antibiotics and anticoccidials in the animal protein production chain. Since then, the vaccination of breeders, commercial layers and broilers to control coccidiosis has been gradually increasing in the poultry industry.

In addition, Vaxxinova (Laboratorio Biovet) was the first animal health laboratory to have vaccines against avian coccidiosis using microsatellite-type molecular markers in a research done in collaboration with experts from the University of São Paulo (USP). 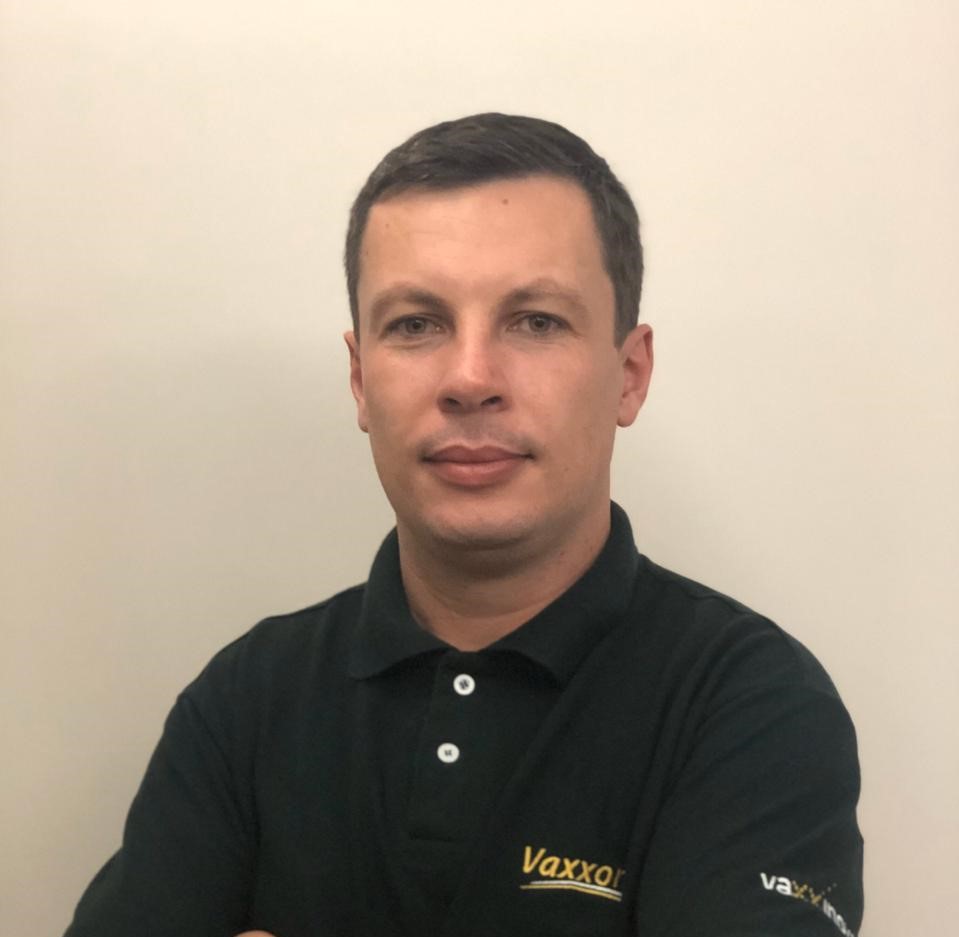 Vaxxon® Coccivet R was also the first commercial vaccine in 2005 to employ the Multiplex PCR technology in the simultaneous detection and identification of the seven recognised species of avian Eimeria.

The development of Vaxxon-Coccivet R included, for example:

The vaccine’s constituent strains were selected in the process according to:

This work was carried out individually for each species involving the selection of seven species of avian Eimeria included in the product:

The vaccine formulation was developed in a sterile diluent compatible with the association of other live viral vaccines commonly used in the first week of life of the birds, such as Infectious Bronchitis and Newcastle Diseases vaccines.

This does not add any handling work to the practice already performed in the field and the ocular application ensures a more uniform vaccination (when compared to the mass routes). Therefore, the flock vaccinated via the ocular route will have a homogeneous protection at an earlier age. 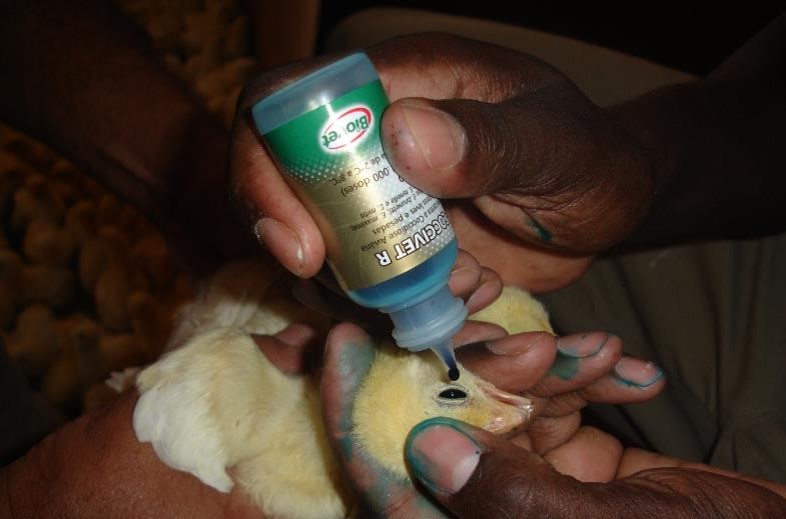 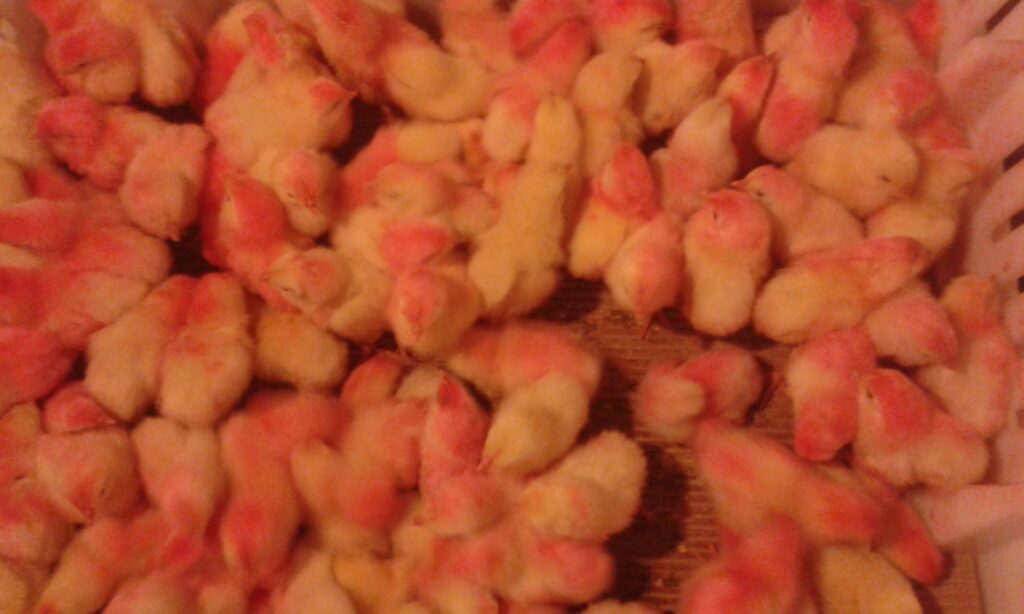 Vaxxon Coccivet R can also be applied via spraying in the hatchery following Good Vaccination Practices, where it is also important to ensure quality in the process. Especially concerning  the uniformity of application in vaccinated birds.

Currently, only very few breeder flocks do not use vaccination as a substitute for conventional drug management.

The constant development and improvement of vaccination management for coccidiosis in breeders has allowed to improve zooeconomic results.

And it was with all this structure and expertise that years later, in 2008, Vaxxinova launched a coccidiosis vaccine aimed at the broiler market: Vaxxon® Coccivet.

Not all available coccidiosis vaccines for use in breeders and broilers are the same.

In fact, each manufacturer has its own formulation; some vaccines may contain less attenuated samples than others. Adopting them implies no longer using anticoccidial drugs in vaccinated flocks.During the recycling of Eimeria, that is, a new cycle that Eimeria carries out in the bird’s organism, from the oral ingestion of sporulated oocysts to the excretion in the faeces of non-sporulated oocysts, in which the quantity of oocysts ingested by the birds on the nests is not controlled, the vaccine itself (depending on the degree or low degree of attenuation) could trigger clinical disease or a severe vaccine reaction, opening the door to secondary enteric problems such as necrotic enteritis (Clostridium perfringens).

Vaxxon Coccivet for use in chickens, produced by Vaxxinova Brazil, is one of the few attenuated vaccines available on the world market that contains five species of avian coccidia:

It is also the only one that contains three strains of E. maxima and is extremely efficient and comprehensive in protecting against virulent E. maxima strains present in the field.

In field use in broilers in Brazil, there is an improvement in intestinal quality as well as a significant reduction in the therapeutic use of antimicrobials aimed at treating clinical coccidiosis and enteritis when compared to conventional coccidiosis control and prevention programmes.

Once inside the enteric tract, the vaccine oocysts rupture starting the different stages of the Eimeria life cycle (sporozoites, merozoites 1 and 2 and gametocytes) mimicking an infection by a wild (field) Eimeria, but without the ability to cause a deleterious effect on the bird.

In addition to the protection generated in the bird being species-specific for each Eimeria species, each stage of the life cycle also generates a specific action of the immune system.

The main form of immunity involved in this protection is of the cellular type, carried out mainly by “T” cells residing in the gut-associated lymphoid tissue (GALT). 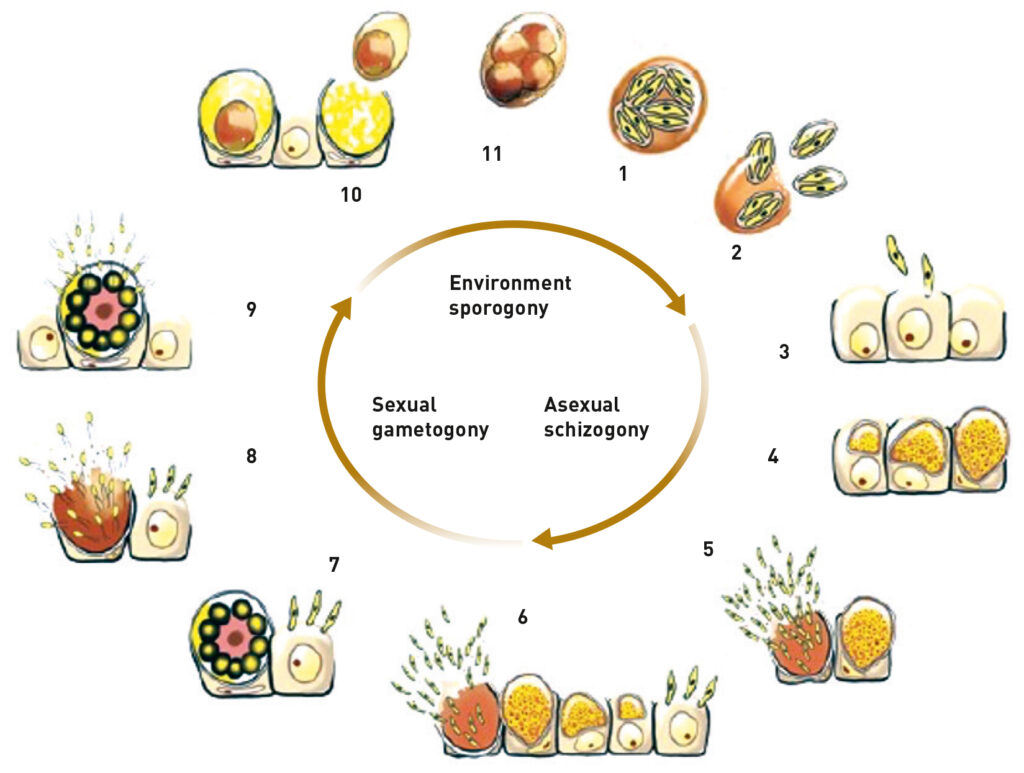 This guarantees early immunity, that is, from the first day of life, which, added to the recycling (ingestion of vaccine oocysts in the nest) in the field, guarantees a boost in immunity (booster effect) and ensures protection throughout the productive life of the birds.

In the field, birds immunised with Vaxxon Coccivet do not need any special or different handling when compared to conventional flocks.

It should only be ensured that the feed intended for vaccinated birds does not contain anticoccidial agents in its composition, that is, agents capable of significantly compromising the development of immunity.

Cooling down the shed

Another crucial point is that the vaccine can be used continuously, flock after flock, for an indefinite period, i.e. there is no “expiration date” for the vaccination programme due to field challenges.

When administering the vaccine via eye-drop or a spray in accordance with the “pre-patent” periods of each Eimeria species, vaccinated birds eliminate the vaccine oocysts through the faeces in the nest of the shed.

Vaccination does not lead to resistance; its mechanism of action allows: 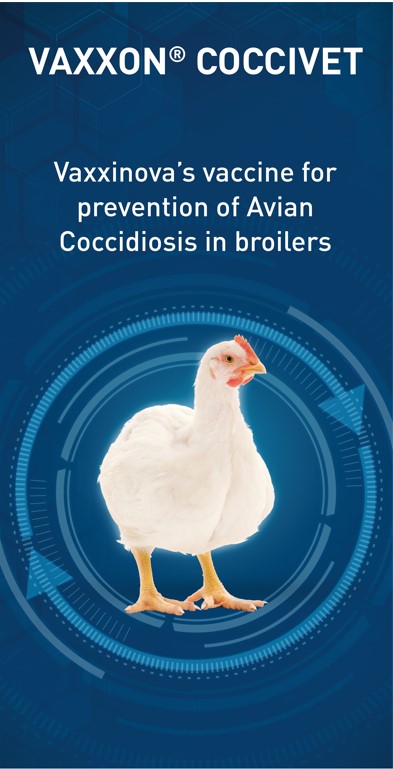 In the current reality that we live in the modern poultry industry, where production costs, mainly related to corn and soya bean prices, are extremely high, the immunisation of broiler flocks with attenuated coccidiosis vaccines has shown a better return on investment.
The protection of birds against clinical disease, the reduction of losses related to enteric problems and the absence of residue in the carcass allow for greater flexibility and adjustments in the feeding of birds in the final period of their weight gain (higher consumption).

Anticipating the use of finishing feed without the presence of anticoccidials can be seen as an alternative with better economic viability in broiler production.

In addition, the company has an experienced team that focuses on the subject, which accompanies the entire vaccine implementation process, as well as frequently monitoring vaccination processes and flock performance in the field, bringing greater ease and safety to the consumer.

Thus, vaccines have continuously represented the importance that Vaxxinova attaches to both quality control and proximity in the provision of services to customers, a work model that advocates dialogue and relationships with partner companies.

This adds value to the production chain through the dissemination of technology and knowledge aimed at the poultry health area.

Disclaimer: this article is a translation from the publication in aviNews in Portuguese. The content relates to the use of the products and its field results in Brazil and Latin American countries.
A reference to any product/service in this article does not imply that such product(s) with the same specifications, is or will be available at your location. Any product shown or referred to on this website may be subject to different regulatory requirements depending on the country of use.
Please contact your local Vaxxinova representative for more information.