Avian Coccidiosis in Commercial Layers – how to prevent and control

Avian Coccidiosis in Commercial Layers: Strategic control in light of the new reality and trend in production systems

Avian coccidiosis, a parasitic disease caused by protozoa of the genus Eimeria, represents one of the infectious diseases with great economic impact in industrial poultry farming. It affects broilers, breeders and layers with losses estimated at 14 billion US dollars per year worldwide (Blake et al., 2020). This includes costs of prophylactic care, control and treatment, mortality and productivity losses due to reduced food digestion and absorption capacity. The disease has also become a major concern for the commercial layer sector, especially with the trend and demand in animal welfare to switch to automated production systems, or “enriched cage” or “cage-free” production systems.

In recent years the table egg production segment has undergone, and continues to undergo, advances in the production structure and in the environment offered to the animals. As an example, vertical and air-conditioned sheds gained prominence. These types of sheds allow maximization of the production of the farms by increasing housing capacity in the same production area. Despite the various benefits, an important point is the predisposition of birds in this type of cage to field challenges from some diseases, especially coccidiosis. The contact and access to feces through the girdles causes in caged layers an epidemiological condition similar to floor layers, triggering the manifestation of the disease once the Eimeria cycle is allowed to complete. 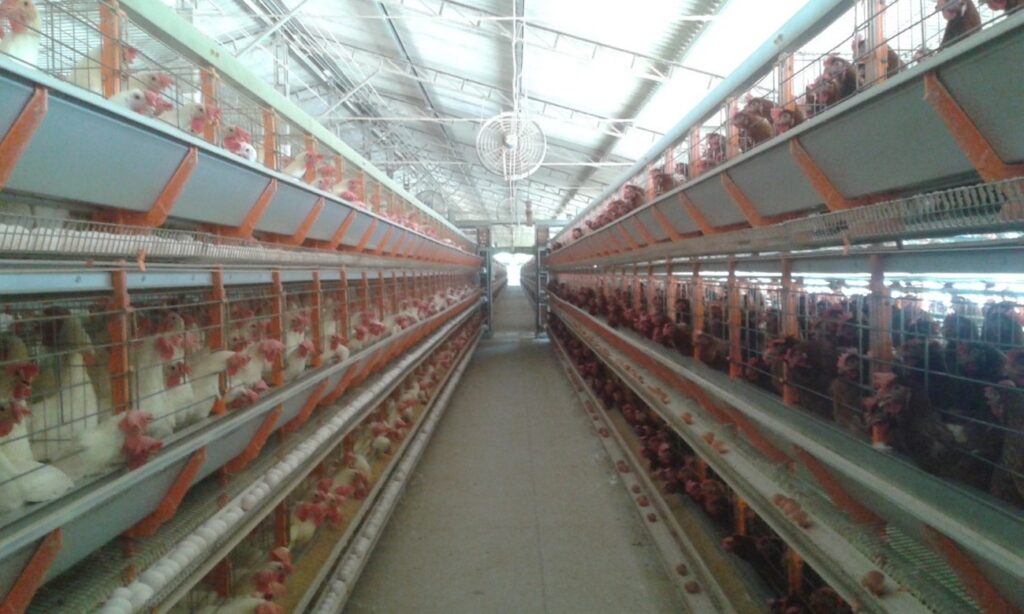 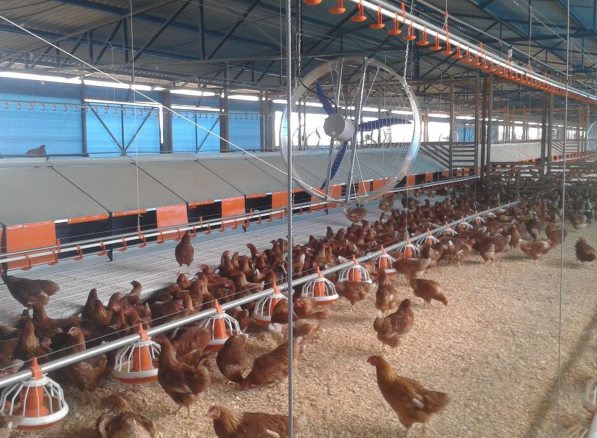 Knowing the reality and the challenges in these current times is part of Vaxxinova’s routine and commitment. Therefore epidemiological surveys for avian coccidiosis in commercial layers in Latin American farms are done systematically, considering all production systems. Whether they are vertical with batteries, breeding or production on the floor, enriched cages or the “Free Range” system. Systematic sampling of feces and intestines of rearing birds in the main commercial egg producing areas confirmed positivity and identification of the main Eimeria species in 100% of the farms with vertical system (E. acervulina, E. praecox, E. maxima, E. brunetti, E. necatrix, E. tenella and E. mitis are always present, to a greater or lesser degree). So far, none of the 3 new species of Eimerias as mentioned by Blake, 2021 have been identified.

In the field we observed that the pathogenesis and severity of the clinical signs of the disease (diarrhea, feed passage, presence of blood in feces, non-uniformity, discards and sudden increase in mortality) vary according to the degree of virulence, the species of Eimeria that infects the flock and the amount of sporulated oocysts ingested by the birds. In addition, mixed infections involving two or more Eimeria species may exist and potentiate the clinical signs and effects of the disease. An important fact is that not seeing clinical signs does not mean that one is free of the disease. Since subclinical or Eimeria infections that do not present clear clinical signs can lead to flock non-uniformity, due to weak intestinal health.

Therefore, in the sector there is a concern with the infection and clinical signs caused especially by Eimeria tenella due to the evident mortality. But the other Eimeria species are also important because they promote extensive destruction of intestinal cells, reduction in the nutrient absorption capacity, immunosuppression and interaction with other field agents.

Hygiene and disinfection measures, use of drugs and vaccination

As ways of prevention and control of avian coccidiosis in commercial layers we can consider: hygiene and disinfection measures, use of drugs and vaccination.

The first way, which includes cleaning and disinfection of the facilities, can help in reducing the infection pressure, but is not very efficient in eradicating the oocysts present in the breeding environment. Since the efficiency of the disinfectants on the oocysts is reduced, due to the structure of the oocysts, which become impermeable to most molecules. Except for ammonia gas and methyl bromide, toxic substances that are difficult to use under non-experimental conditions.

The other strategy already for years is the use of drugs, with cyclical results. They are divided into two categories: chemicals and ionophores. Chemicals (Sulfaquinoxaline, Amprolium, Diclazuril, among others) have a specific mode of action, only acting in a certain stage of development or phase of the parasite. This enables a rapid adaptation of the parasite to the drug and facilitates the emergence of resistance. Ionophores are already made up of complex molecules that act in the transport of monovalent and divalent cations across the parasite membranes. These drugs (monensin, salinomycin, lasalocid, etc.) cause degeneration of the parasite and eliminate it by depleting its energy reserves. They are drugs of complex action and are less sensitive to the development of resistance. However, it is widely known that the use of drugs for prolonged periods of time and without rest leads to the selection of resistant Eimeria strains in the field. The pressure from consumer markets to have products originating from non-medicated poultry at their disposal means that drugs are less and less used as a form of control.

Vaccination is an established practice in the breeder, broiler and commercial layer floor-breeding segments. It is now emerging as a tool of choice for coccidiosis control in vertical shed systems, enriched cage systems and free range farms.

This practice in commercial layers is an important strategy when considering the current reality, with requirements of better animal welfare and not using drugs in food production. Vaccination does not induce resistance and its action mechanism allows the dissemination and colonization of the shed by vaccine oocysts, substituting the pathogenic oocysts in the field and maximizing efficiency and batch to batch results.

In order to carry out this practice, we must remove all medication that has action on coccidia from the feed and drinking water, as medication inactivates the vaccine and compromises protection.

Vaccines are sophisticated tools for the control of avian coccidiosis. Most of them contain sporulated oocysts of the various avian Eimeria in their composition and are presented in liquid form. Extra care must be taken in the cold chain to prevent freezing of the vaccine as this causes  inactivation of the vaccine.

The ideal product must meet important technical requirements which determine its efficacy. Such are composition, attenuation, broader protection and formulation. 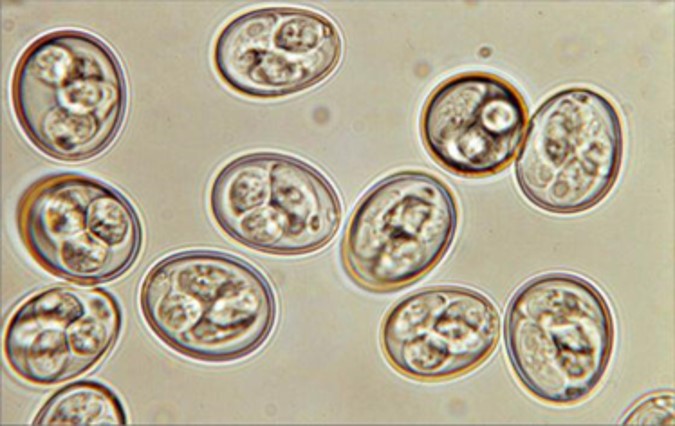 Contain at least the 7 main* pathogenic Eimeria species for birds since there is no cross-protection between species *(a new study by Blake et al. (2021) demonstrated and cataloged 3 possible new species of Eimeria, – E. lata, E. nagambie and E. zata). Incomplete products will allow exposure of birds to field challenges, even if they are subclinical.

Be attenuated or of low virulence to avoid adverse reactions after application and mainly during recycling in the field, where there is no control over the amount of oocysts ingested. We must have the approach that each bird must “expend” energy to develop its body structure and not react to an infection.

Selection of strains compatible with field challenges, once there is the possibility of interspecies variation, including variant strains, already identified under field conditions.

Number of adequate oocysts per dose and the viability of these oocysts. A very common mistake is to compare the number of oocysts per dose of different vaccines. This is not valid because each vaccine has its specific oocysts, even from the same species, but with particular characteristics (virulence and/or attenuation).

Most of the commercial products available recommend only vaccination of layers at the plant, at the first day of age, by spray.

Vaxxon Coccivet R can be applied both in the plant (by spray) and in the field, by ocular route. It is applied between the first and seventh day of life of the birds and can be combined with Newcastle, Bronchitis and Gumboro viral vaccines, in one application handling. 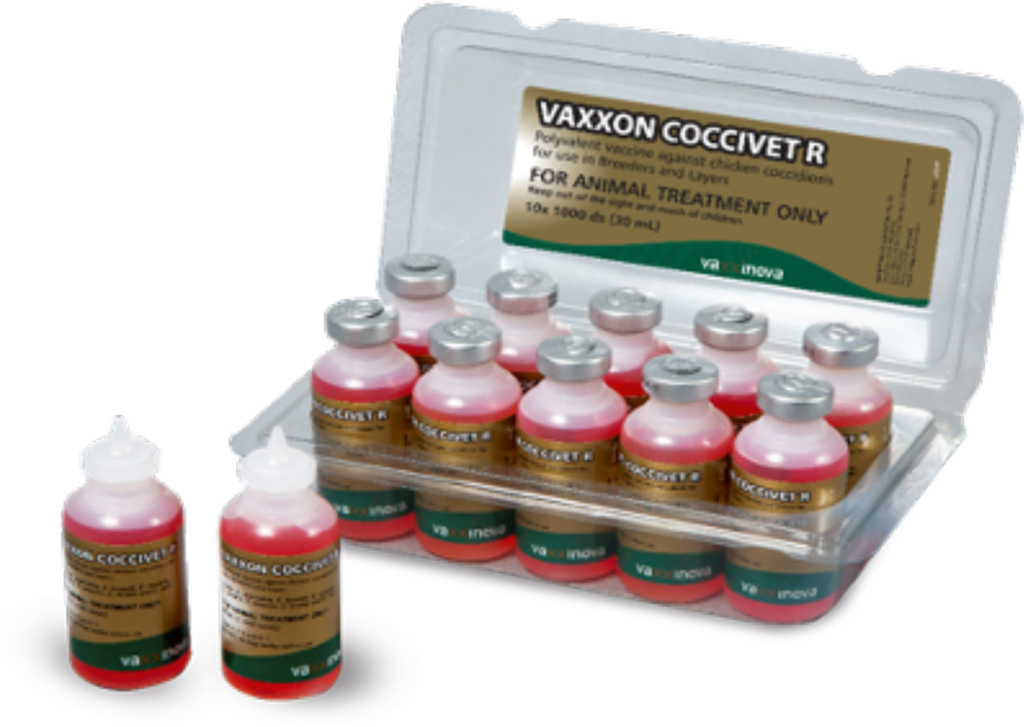 Any and all individual vaccine application management will be more uniform than a mass application. However, with an increase in flock sizes to sometimes over 100,000 birds, spray application management will be more appropriate. For the best results it is necessary that the entire process, from vaccine transportation (cold chain and correct storage) to preparation, dilution and application with the use of specific machines, is audited by people trained by the product supplier. Spray application machines, whether with fixed nozzles or “fan” system or even modern systems of applicators with ribbons and double nozzles, which cover up to 98-100% of vaccinated pullets, must be very well maintained, cleaned and regulated for maximum vaccination coverage. 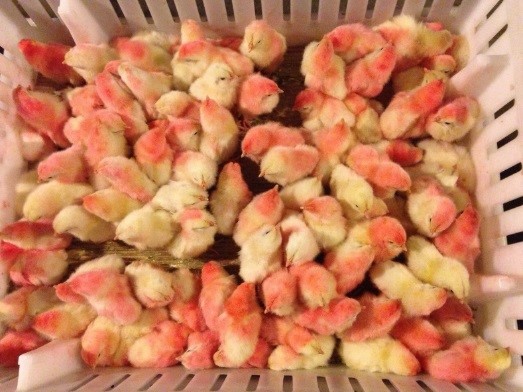 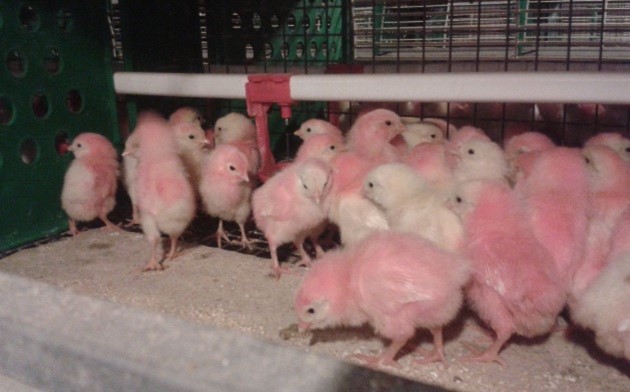 Vaccinated pullets in the plant

Important on-farm management is to receive vaccinated birds in cages with 70% of the area lined with Kraft paper with a minimum thickness of 80 g/ cm2.  The paper is kept until 16-17 days post-vaccination to ensure that at least two cycling events occur, reinforcing immunization.

The immune response starts at the moment of vaccine application through the controlled exposure of vaccine oocysts. Guaranteeing early immunity, which adds to recycling and guarantees a reinforcement of immunity and assures protection for all its productive life. Once immunity against coccidiosis is established, there will be a reduction in the risks to intestinal integrity, favoring a balance of flora and ensuring better conditions for food digestion and nutrient absorption. Thus, birds can express all the genetic potential to reach and exceed the expected zootechnical parameters. In practice this translates into heavier birds, more uniform flocks, reduced feed conversion and lower mortality, culminating in higher profits for breeders.

Vaxxon Coccivet R was developed especially for long-life-cycle birds through the collection of hundreds of samples of feces and intestines of birds, selecting and isolating 7 main species of avian Eimeria that make up the product. This ensures that the vaccine brings fast and efficient immunological protection against pathogenic field strains. The perfect balance between composition, dosage and attenuation of the Eimeria strains present in the vaccine ensures the right degree of  immunization.

With almost 20 years in the poultry market,
Vaxxon Coccivet R is a leading vaccine in the segment for breeders and commercial layers. It confirms Vaxxinova’s expertise in coccidiosis control and represents a reliable link for the main producers of fertile eggs, day-old chicks and commercial eggs in Latin America. 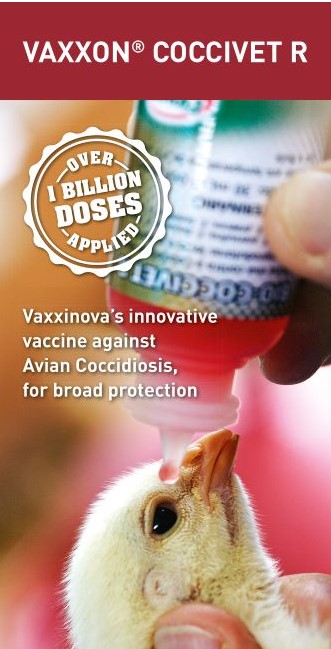 Disclaimer: this article is a translation from the publication in aviNews in Portuguese. The content relates to the use of the products and its field results in Brazil and Latin American countries.
A reference to any product/service in this article does not imply that such product(s) with the same specifications, is or will be available at your location. Any product shown or referred to on this website may be subject to different regulatory requirements depending on the country of use.
Please contact your local Vaxxinova representative for more information.